>Greater Respect on the last day of Women’s Month 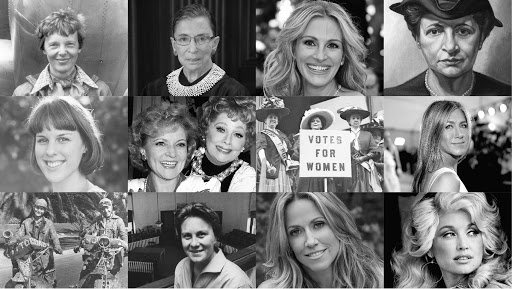 A tribute to the women who have inspired the Greater Thought team.

BRYAN
For me, my mother, grandmothers and neighbor Judi all have been huge influences in my life. All strong women and handled life with grace and power. But the women they introduced me to in my youth-consciousness were foundational for me. Lucille Ball, Dolly Parton, Betty White are 3 women I recall growing up watching and idolizing and still do today. Their presence, their commitment to charitable causes and their influence are still relevant today. Lucy was instrumental in green-lighting the Star Trek TV series back in the day, when other studios passed on it. Dolly and Betty both have spent their careers doing good for those in need. In fact, Betty’s devotion to the care of animals is legendary and Dolly personally donated $1M to the development of Covid vaccines and housed families displaced by the Smokey Mts. fires. We know them as entertainers, for their comedy as they made us laugh, but they have also helped us have conversations about real life situations in daily life.

DANA
I looked up to the women who stood firm in their beliefs despite opposition. Augusta and Adeline Van Buren, who rode across the country on motorcycles in 1916 sticks out in my mind. They were repeatedly arrested for wearing mens clothes. Ironically, they were trying to become dispatch riders to help support men going to war. Articles about them talked about the bikes but not the riders and touted it as a ‘vacation’. They were never allowed to be military dispatch riders. I have tremendous respect for women like Ruth Bader Ginsburg, Amelia Earhart, and countless others who just continued to be the incredible people that they are despite ridicule and opposition.

MITCH
I had the privilege of getting to know an extremely powerful and inspired woman named Sarah Super. Sarah is a rape survivor. She lived through a life-threatening experience which inspired her to create Break the Silence; A space for survivors to speak out, and a platform for change. The mission of Break the Silence is to support survivors of sexual violence by striving to end rape culture and hold perpetrators accountable. Sarah is an incredible person that I look up to a great deal.

You can learn more about Break the Silence at: www.breakthesilence.org

JAY
There are so many women of the past and present that hold a special place in my heart. I have tremendous admiration for all the trailblazer women who intentionally set positivity as their driven force and purpose in life. For me, growing up, it’s been my mother and grandmothers who set this foundation of truths that even the impossible is possible.

COLE
In a previous career as a hairstylist, I had the opportunity to have Ruth Bader Ginsburg in my styling chair for a cut and style before a speaking engagement at the UofM. The entire experience was both harrowing and inspiring at the same time. Her and I had the opportunity to connect and discuss a bit of both of our lives. She sought out a salon and a stylist through her team’s vetting process, that fit her mission and values and I was privileged enough to have had the time and attention of one of the most interesting and influential women of our time… even if it was just for an hour or so.

ERIC
Growing up I always admired Jennifer Anniston, Julia Roberts, and Sheryl Crow. All three of them were strong, smart, creative, and were good role models. They all seemed to have that inherent thing that you can’t teach. It’s that thing that you are just born with. But what that ended up teaching me is that if you are passionate about the right things, and you know what you want to be, then you should just go for it!

Women of Substance I Admire

Francis Perkins – United States Secretary of Labor
In 1933 Francis Perkins was appointed Secretary of Labor by President Franklin D. Roosevelt becoming the first female cabinet member, thus the first woman to enter the presidential line of succession. When appointed she said, “I came to Washington to work for God, FDR, and the millions of forgotten, plain common workingmen.”

As an American workers-rights advocate who served as from 1933 to 1945, the longest serving in that position. she helped make labor issues important in the emerging New Deal coalition She was one of only two of the Roosevelt cabinet members to remain in office for his entire presidency. A trailblazer, she was largely responsible for the U.S. adoption of social security, unemployment insurance, the federal minimum wage, and federal laws regulating child labor.

Harper Lee – American Author
In 1960, at a time when the Civil Rights Movement gripped America … Harper Lee wrote To Kill a Mockingbird, a story told through the young eyes of young Scout Finch, a white girl who experiences the unfounded and unjust treatment of a local black man accused of raping and beating a white woman.  Through her eyes of innocence and a remarkable ability to question the status quo of life in the segregated Southern United States in the 1930s, Scout struggles to make sense of a culture that demonizes a fellow man because of the color of his skin.   Harper Lee’s To Kill A Mockingbird won the Pulitzer Prize, forever shining a light on the indecencies of discrimination and racism, and was adapted for the stage and film.

Greater Thought is a collaboration that came together naturally out of identifying a need.